It took a while before the penguins were willing to accept the stranger... 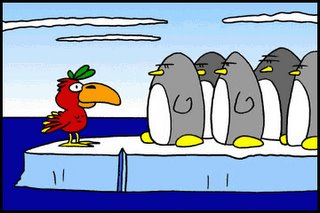 Here's another part of an Orkut discussion in reaction to my post about western arrogance...

An Orkuter said:
Esther, my apologies, but I've read through your comments several times now and I'm having trouble understanding quite what you're saying. Apparently it all comes down to "intercultural competences" and an appeal to us all to just get along. Why, then, the title "Western arrogance" ? Are we somehow alone or highlighted for special treatment? I can't help thinking that your real "face-to-face" is between your intellect and your conscience. It is therefore unfortunate that you won't find Derrida give a moment's notice to the latter. Then you wouldn't be confused about appropriate action. I think Levinas would go down a treat with Hamas. Why don't you send them a few copies?

I replied:
No, no special treatment for Westerners. And if my "face-to-face" is only between my intellect and my conscience then something is very wrong. For Levinas a "face-to-face" is always a face faced with the totally other, not just with itself.

I wrote about "Western arrogance" because I read so little about that in the media and I hear so little people criticize that side of the story. This while there's a lot of attention for "Eastern arrogance", or the way in which a small group of extremist Muslims think that they can take over the world with a fundamentalist Islam and who think that they have the right to use extreme violence against all kind of people who don't have anything to do with it when some cartoons against the Islam were made - this form of arrogance is being criticized all the time. I wanted to point out a different form next to that.

If the Hamas would listen to what Levinas said it would be very good (not really realistic idea). That's the main problem with Levinas, if the whole world would read all his books and understand it, it would have a considerable positive effect on ethical behaviour in the world. But very few people read everything and understand it. If people would be focussed on ethics as much as Levinas this would certainly help I think.

Intercultural competences, open-mindedness, willingness to meet the totally other, trying to come closer to each other, it's always something that has to come from both sides.

So indeed Muslims have to accept that at the other side of the world some traditions of satire exist which are offensive for them, but which are an essential part of the Danish culture and so which in principle should be respected by Muslims. And at the same time the Danish journalists should have realized what the effect of their actions would be for others, they should have realized that the cartoons would be considered as much worse in another culture than they consider it themselves.

Maybe the reason why I criticize Western arrogance more than Eastern arrogance is because the culture of the West is my own culture. I see this around me all the time and I get tired of the arrogance.
All this shouting for freedom of speech and so little attempts to put oneself in the shoes of a Muslim to imagine how it would feel then.

It's also with regard to the multicultural society. I spoke with a friend about the growing polarisation and he said: "I just think that immigrants should assimilate more." It's so easy then for the natives, you don't have to do anything, you just force the immigrants to assimilate.
I am strongly convinced that intercultural contact / cooperation / living together is only possible when all different groups try their best for that. I also read a newspaper article titled: "Are the immigrants really willing to integrate?" It's an important question of course, but it's not the only question which counts. A question which is just as important is: "Are the natives willing to accept strangers in their society?" And to accept means to count them as full citizens and to accept that they are totally different from us, and that they will remain different even when they try to learn Dutch as soon as possible and when they learn about the Dutch standards and values and habits and when they obey to the law.
I don't want to turn it around and make it a one way street in the other direction, but because the views are in my opinion unbalanced at this moment, I focus on the side which doesn't get enough attention in my opinion.

Danish cartoons revisited
Danish cartoons - continued...
Western arrogance
Danish cartoons and individual responsibility
Onvoorwaardelijke aanvaarding en de zorg voor het ...
Islam fascination
The importance of identity
Totalisation in the street
Why are we so?
Side by side