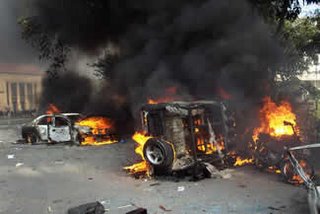 Sorry, again another post related to the Danish cartoons...

Until now I didn't pay much attention to the embassies that were put on fire and other violence used by Muslims as a protest against the cartoons. I found it very bad and worrying that these things were happening, but I didn't find it very interesting for the political and ethical debate, because it's very clear that it's bad and there is not so much to say about it for the rest. I expected that it wouldn't take long anymore before these outbursts would calm down. But I was wrong...

In this way it becomes harder for me to support the Islam as a peaceful civilized religion. The facts of what is happening now don't seem to support the things I say about the Islam and Muslims. The situation is still that most Muslims in the world are moderate and peaceful, but the great amount of violence which can be seen at many places in the world now doesn't improve the reputation of the Islam...

Comments:
In the start there wasn't much speculation on the issue but after couple of days Pakistan played a leading role in the demonstrations all around the world, which also turn bitter after it took a shape of political issue...

It was a bad step by danish news reporter or cartoonest.But the Muslim world shouldn't protested like that,they have could protested peacefuly,Vilance is not the right solution of this or other problems.

Danish cartoons - continued...
Western arrogance
Danish cartoons and individual responsibility
Onvoorwaardelijke aanvaarding en de zorg voor het ...
Islam fascination
The importance of identity
Totalisation in the street
Why are we so?
Side by side
Enchained in roots